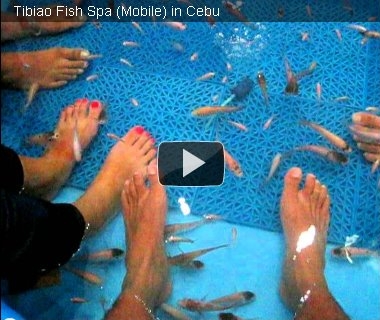 Tibiao fish spa, a promising business venture which first started in Tibiao town invaded the queen city of the south. In a 22-day exhibit in Parkmall which started on July 23, Cebuanos were made aware about the relaxing effect and the soothing sensation of fish therapy, the country's first of this kind. Live fishes contained in an air-inflated and mobile mini pool nibble and clean outer layer of dead skin as one dips his/her feet.

As part of business expansion, Tibiao fish spa came to test the market as business oppurtunities in Cebu city is by far an excellent one after a successful opening of their branch in Iloilo city.

Conceptualized by a young, dynamic and imaginative entrepreneur Flord Nicson Calawag of Tibiao Antique, fish spa is now getting positive response as the organizers extended their stay in Parkmall and even planning to put up their branch as Cebuanos received the business well.

Flord Nicson Calawag, general manager of Tibiao fish spa is a marine fisheries graduate from the University of the Philippines in the Visayas (UPV) in Miag-ao, Iloilo,  first discovered a kind of fish from a friend's mountain pond that creates a relaxed feeling while nibbling on dead skin and he later utilized them in an experiment and studies with fellow UP-Iloilo friends that gave birth of the first ever fish therapy in town of Tibiao.

In an interview by the busness mirror, Calawag said Tibiao Fish Spa is the most affordable fish spa in Asia.

He said fish therapy is not new. “We searched the Internet and learned we were not the first. There are already fish spas in Turkey.”

But a fish spa then was considered a luxury as most establishments offering such service use Garra rufa fishes, which are imported from Turkey.

Tibiao Fish Spa is the first to use local fishes for fish therapy.

As their business grows, Calawag said they own a breeding technology to ensure they have enough Tibiao fishes to supply their branches.

Calawag said they could breed thousands of fishes in two to four months, adding that every month they are targeting 5,000 production.

He also admitted they are considering moves to secure a patent for their breeding technology.

Don't miss what more Mr. Calawag had said in an interview by the business mirror!

Reply home-tibiao
12:52 AM on September 7, 2011
Thank you for dropping by Mr. Flord Calawag. Tibiao is for all of us and let all Tibiaoanons work hand in hand to promote our place. I would like to congratulate you personally for the instant success of Tibiao Fish spa and Tibiao Adventures. More power and God bless you always!

Reply Flord Nicson Calawag
11:55 PM on September 6, 2011
THANK YOU Home-tibiao Antique for the blog! You inspired us to promote and market our beautiful town Tibiao. God bless you more!