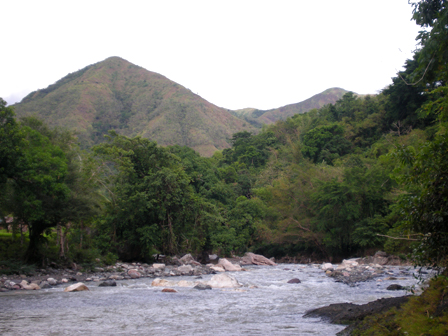 It was on August 3, 1786, at 5:00 PM, when the group of Datu Oguid Pagsuguiron from Borneo landed at Calawgan Creek (now Poblacion Sur).  The following day, Datu Oguid together with his two sons and five men went to the foot of the tallest mountain to survey a settlement site and find a place ideal for dwelling.  They packed all their belongings for the next day’s journey.  At dawn of August 6, 1786, the group walked to the foot of the highest mountain bringing with them their breeding animals, variety of vegetable seeds and their personal belongings.

On August 8, 1786, Datu Oguid called all male settlers to survey the land to be tilled and planted with different grains, vegetables and root crops from lowland to upland areas.

In the morning of May 2, 1826 Datu Oguid called for a meeting to plan a celebration to give thanks to God for all the blessings they received after decades of safe, progressive and harmonious relationship in his community away from his cruel brother in-law the Sultan of Borneo and the Muslim pirates invasions.

During that meeting, they agreed to construct a church with a 20 x 10 x 4 yards dimension, with thatched palm leaf roofing and wooden slab walls.  When the construction of the church was completed on October 28, 1826 Datu Oguid made a visit to Gov. Barboza and Fr. Islao at the Parish of Barbaza requesting to hold a mass, christen and solemnize marriages on their newly completed church at Barangay Oguid at the foot of the tallest mountain near the second river from Barbaza town.

On November 1, 1826 at the Vesperas, the big wooden Cruz was erected atop the mountain as per instruction of the Governor (where Mt. Cruz got its name) and the thanksgiving mass was held the following day - November 2.  After the mass, there were revelries, games and sumptuous food and drinks served. During the merrymaking, Gov. Barboza delivered his message praising Datu Oguid Pagsuguiron and gave orders in Spanish language which was interpreted by Jose Tabuyan Modesto in local dialect to wit:

That the barrio will be named Amar-Paris because many      pairs of lovers which were married, solemnized and the

residents of the community were christened.

That as a directive that the Barrio Site will be transferred to lowland preferably near the sea to be accessible to other towns.

Inspired by the messages and directive of the Governor and without hesitation, Datu Oguid stood up and accepted all the orders.

It was on November 6, 1828 when Datu Oguid Pagsuguiron Amar chose five men to go downhill to survey the proposed town site between the middle of the two creeks, Calawgan and Palaypay. Juan Amar Sarcino drafted the new towns site (the present town site of the municipality) including the location  of church,  convent,  plaza,  the street formation and the residential areas. On November 10, 1828, Datu Oguid ordered to clean the area from creek to creek and the clearing job was done after three days.  On November 13, all dried shrubs were burned to clear the area. On the 14th  of  November,  the  site  intended  for  the  church  and  the  convent was laid-out.

Trees were cut on November 17-21, to provide construction materials for the church and the convent.  Logs were hauled from the hilltop to the construction site on 28th and 29th.  On December 1, 1828 the materials needed for the posts were prepared.  Two days later, the 24 church  posts were erected and the work was completed.

The construction of the 20 x 10 x 8 yard convent started on December 15, and ended on December 19 leaving the work on the roofing, waiting for the shipments of construction materials, purchased in Iloilo and loaded on a Vinta.  To make travel  easier the footbridge at Palaypay Creek was constructed on December 22–28, and the Calawgan wooden bridge on January 5, 1829.

On January 15-21 the Cemetery was built between Calawgan and Sawang Creeks. Datu Oguid P. Amar called then for a meeting on January 22 requesting Gov. Barboza and Fr. Islao of Barbaza for a permanent parish priest which, was written in Spanish language as suggested by Juan Amar Sarcino.

Juan Sarcino together with eight other men made representations to Gov. Barboza and Fr. Islao on January 23, 1829.  However the request was denied since it is only the Bishop of Cebu who can grant the said request.

In a meeting convened on January 24, 1829 Datu Oguid selected an eight-member delegation as representative to the Bishop of Cebu.  It was Basilio Dumala-og who headed the delegation with the members to wit: Vinda, Juan, Zus, Sitoy, Julian, Mariano and Amboy.  The delegation left the following day passing mountain ranges of Leon and reaching Iloilo town proper at 4:30 PM on January 31, 1829.  From Iloilo they rode on a Paraw and reached Cebu on February 1, 1829 at 12:00 o’clock midnight.  In the morning of the next day, they made an audience with the Bishop of Cebu. The Bishop granted the request and assigned Fr. Eulogio Cardones of Manduriao, Iloilo as the assigned priest of Oguid’s town.  Mission fulfilled the group returned home on February 3, 1829, 12:00 midnight.

After 10 days and five hours of a successful journey the delegation returned home with Fr. Cardones.  They immediately called for a meeting and henceforth to hold the thanksgiving mass – a town fiesta.  The first of which was held on March 18-20, 1829.

ORIGIN OF THE TOWN’S NAME

During the Spanish times, Spanish soldiers happened to see group of natives picking up shells locally known as “Kuhol” in the muddy fields of Hatayhatay.  They asked the natives what was the name of the municipality while pointing to the vast expanse of land in the municipality which, is covered with tall grasses locally known as “TIGBAO”.  The natives misconstrued the question and believing that the Spaniards are asking for   the name of the tall grasses thus, quickly answered, “Tigbao”.  Since then, they started calling the place Tigbao but due to the difficulty in pronouncing the word they changed it to TIBIAO by which name the municipality is known up to the present.

Reply 123
12:16 AM on July 1, 2018
"y got Real Madrid and Barcelona, Atletico Madrid have been to two finals and Sevilla have won the three Europa Leagues."
123 http://Stores.shoesoriginal.com/Supreme-Champion-Embroidery-Black
-Hoodie-TT1458.html

Reply joenelly talagtag
8:34 PM on February 4, 2014
i like the hometown of Tibiao..because i discover more about the history of this town and it is because i made it as my subject to my project in ICT.