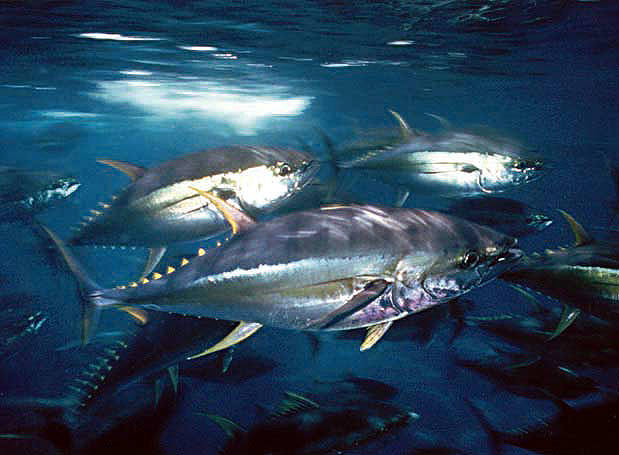 What is yellow-fin tuna?

The yellowfin tuna is one of the largest tuna species, reaching weights of over 300 pounds (136 kg), but is significantly smaller than the Atlantic and Pacific bluefin tunas that can reach over 1,000 pounds (454 kg) and slightly smaller than the bigeye tuna and the southern bluefin tuna. Reported sizes in the literature have ranged as high as 239 centimeters (94.1 in) in length and 200 kilograms (441 lb) in weight. The International Game Fish Association (IGFA) record for this species stands at 388 pounds (176 kg). Angler Kurt Wiesenhutter boated this fish in 1977 near San Benedicto Island in the Pacific waters of Mexico. Two larger fish weighing 395 lb and 399.6 lb were boated in 1992 and 1993 respectively. These remarkable fish stand as the largest rod and reel yellowfin tuna captures thus far.

Yellowfin tuna are epipelagic fish that inhabit the mixed surface layer of the ocean above the thermocline. Sonic tracking has found that although yellowfin tuna, unlike the related bigeye tuna, mostly range in the top 100 meters (328 ft) of the water column and penetrate the thermocline relatively infrequently, they are capable of diving to considerable depths. An individual tagged in the Indian Ocean with an archival tag spent 85% of its time in depths shallower than 75 meters (246 ft) but was recorded as having made three dives to 578 m, 982 m and 1,160 meters (3,806 ft).

Deeper diving and cruising seems to happen more often in the daytime, changing to shallower swimming at night, probably in response to the vertical movement of prey items in the deep scattering layer. They are normally a schooling fish and stay in their immediate school.

School of yellowfin tunaAlthough mainly found in deep offshore waters, yellowfin tuna may approach shore when suitable conditions exist. Mid-ocean islands such as the Hawaiian archipelago, other island groups in the Western Pacific, Caribbean and Maldives islands Indian Ocean, as well as the volcanic islands of the Atlantic such as Ascension Island often harbor yellowfin feeding on the baitfish these spots concentrate close to the shoreline. Yellowfin may venture well inshore of the continental shelf when water temperature and clarity are suitable and food is abundant.

Yellowfin tuna often travel in schools with similarly sized companions. They sometimes school with other tuna species and mixed schools of small yellowfin and skipjack tuna, in particular, are commonplace. They are often associated with various species of dolphins or porpoises, as well as with larger marine creatures such as whales and whale sharks. They also associate with drifting flotsam such as logs and pallets, and sonic-tagging indicates that some follow moving vessels. Hawaiian yellowfin associate with anchored fish aggregation devices(FADs) and with certain sections of the 50-fathom curve.

Yellowfin tuna prey include other fish, pelagic crustaceans, and squid. Like all tunas their body shape is evolved for speed, enabling them to pursue and capture fast-moving baitfish such as flying fish, saury and mackerel. Schooling species such as myctophids or lanternfish and similar pelagic driftfish, anchovies and sardines are frequently taken. Large yellowfin prey on smaller members of the tuna family such as frigate mackerel and skipjack tuna.

In turn, yellowfin are preyed upon when young by other pelagic hunters, including larger tuna, seabirds and predatory fishes such as wahoo, shark and billfish. As they increase in size and speed, yellowfin become able to escape most of their predators. Adults are threatened only by the largest and fastest hunters, such as toothed whales, particularly the false killer whale, pelagic sharks such as the mako and great white, and large blue marlin and black marlin. The main source of mortality, however, is industrial tuna fisheries. 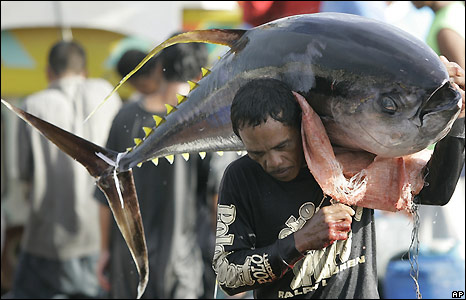 Formerly, much of the commercial catch was made by pole and line fishing, using live bait such as anchovy to attract schools of tuna close to the fishing vessel that were then taken with baited jigs on sturdy bamboo or fiberglass poles or on handlines. This fishery, which targeted skipjack and occasionally albacore, as well as yellowfin, for canning, reached its heyday between World War I and the 1950s before declining. The most well-known fleet of pole and line boats sailed from San Diego in California and exploited abundant stocks in Mexican waters, as well as further south to Panama, Costa Rica and the Galapagos Islands. [2] Interviews with fishery participants as well as video footage preserve the memory of this fishery and the boats and men that pursued it.[3]

Pole and line fishing is still carried out today in areas such as the Maldives, Ghana, and by a small number of boats fishing out of the Canary Islands, Madeira and the Azores. Few pole and line boats now specifically target yellowfin and the contribution that these fisheries make to the total commercial catch is incidental to the total take. In the Maldives, for instance, the catch is a mix of skipjack tuna and small yellowfin that often associate with them.